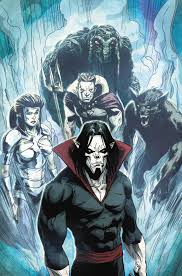 Michael Morbius sat alone in his darkened cell and finished a late dinner. A model prisoner of late, he’d earned enough goodwill over the past two months to get a meal he hadn’t had in years: linguini in pesto sauce. He savored the texture of the pasta, so much richer than he’d ever noticed before — a rare benefit of his condition and the heightened senses that came with it. The garlic in the sauce was simply marvelous. He concluded the meal by sucking the last noodles into his mouth between his fangs, then running his finger along the edges of the plate and licking it clean, and finally washing it all down with a pint of blood. Human, of course. It was disappointingly cold, but he’d discovered the hard way that microwaved blood often lost much of the flavor. He didn’t know how the warden and the Raft’s medical wing secured the blood he needed for survival, and he didn’t ask. No need to look a gift blood bank in the mouth.

During his imprisonment, Morbius had done his best to avoid unpleasant interactions with any of the Raft’s other notorious inmates. It had been difficult with the madman known as the Crusader, who screamed “UNDEAD! UNDEAD! SLAY THE MONSTER!” whenever he spotted Morbius, but Michael eventually became adept at avoiding him. He was not as fortunate, however, with the bestial Tiger Shark, who — presumably bored or on power-dampening drugs — bullied him and challenged him to a biting contest on Morbius’ second day as an inmate. Morbius had muttered a comment about the inverse relationship between intelligence and steroid abuse. Tiger Shark had not reacted well. Although the aquatic villain’s many, many sharp teeth had dealt some nasty wounds to Morbius before the guards interrupted them, the vampire’s precise strike — dangerously close to Tiger Shark’s carotid artery — had achieved the desired effect.

As Michael’s dear mother had once said… Quality, not Quantity.

Dinner done, he waited. If all went well, he would meet with his lawyer within the hour and begin the laborious legal work necessary to secure his release. Temporary insanity has been used successfully in cases like his — how many times has Bruce Banner escaped jail time? — but Michael knew that he didn’t have the “luxury” of a green-skinned, violent alter ego upon whom he could lay all the blame. No, there was no one responsible for his dark, bloody actions but himself…

Morbius heard the guard’s gruff voice through his cell’s intercom. “Stay back from the door, Morbius. Your attorney is here.” Two seconds later, the metal and reinforced PlastiSteel™ door slid back, and Matt Murdock walked inside. As the S.H.I.E.L.D. guard moved to a panel to increase the cell’s lightning, Murdock raised a hand and said, “No need to turn on the lights … if that was your intention, agent. I certainly don’t need it, and I believe my client is more comfortable without it.” The S.H.I.E.L.D. guard nodded and said, “Suit yourself. I’ll be right outside the door with your other escort.” The guard looks at Morbius. “Behave yourself, Morbius.”

“No worries, Agent Boehme,” replied Morbius. “And please give my regards to Agent Hanna. The pasta was excellent.” He stood up and reached out a hand to Murdock. Like nearly every other superpowered personality in the New York area, Morbius had heard the rumors that Murdock was actually Daredevil. Morbius hadn’t been sure. Oddly, despite Morbius’ many encounters with Spider-Man and Dr. Strange — both frequent allies of Daredevil — he’d never encountered Daredevil face to face. But now, standing in front of Murdock and sensing the strong, steady, athletic beat of the man’s heart — and the surging,enticing flow of blood within his veins — Morbius decided that maybe the rumors were not completely baseless, after all. “Thank you for coming, Mr. Murdock.”

Murdock reached out for Morbius’ hand and clasped it on the second try. “It’s my pleasure, Dr. Morbius.” The use of “Doctor” stirred a brief, unexpected surge of pride within Morbius. He hadn’t heard anyone say “Dr. Morbius” in quite a long time.

Morbius guided Murdock to the table that had been set up for this meeting, and Murdock opened his briefcase and sat down. “I’ll be honest, Doctor,” Murdock says. “I had a long discussion with my partner about whether to take this case. It will be hard to persuade a jury that you were not in your right mind during each of the assaults in question. However,” he continues, smiling, “I like a challenge, especially in the growing field of Superhuman Law. My first defense of Bruce Banner had its … painful moments, but we’ve all learned a great deal since then. I believe I can help you.”

Morbius smiled. “That’s excellent, Mr. Murdock. I am most grateful. I will be able to pay you if we’re successful. I have a significant amount of money generated by my medical patents….”

“…and all of those accounts are currently frozen by the government,” finished Murdock. “I know. But we can work something out. The publicity alone from this case should…”

The entire floor shook violently, and Morbius and Murdock were thrown to the ground! Morbius got to his feet quickly and immediately noticed that the corridor lights had shifted to an emergency setting. He heard Agent Boehme outside talking excitedly into his communicator, but he could not discern the words through the ringing in his ears. Nearby, Murdock also got to his feet, and Morbius noticed the lawyer cocking his head slightly, like a dog reacting a high-pitched squeal. “Power’s out,” said Murdock grimly. “This is bad.”

This entry was posted on November 12, 2015 by jpjolin in Uncategorized.