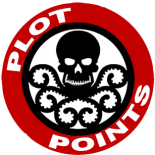 Yesterday, Mark brought us the beefy and impressive datafile for Optimus Prime, leader of the Autobots. As powerful as Optimus Prime is however, he is nothing without his Autobot buddies to back him up. So, let’s meet two of Prime’s main Autobot compatriots: Prowl and Jazz!

Prowl serves as the Autobots’ military strategist. Optimus Prime keeps Prowl nearby at all times for his invaluable combat expertise. Prowl is a by-the-book and logical soldier. He does not react well to the unexpected and believes everything should go according to plan and every combat situation has a corresponding military formation. Though his stickler attitude causes him to bump head gaskets with his Autobot allies, especially those that are carefree and haphazard, Prowl is a valuable ally to have around in a scrap. 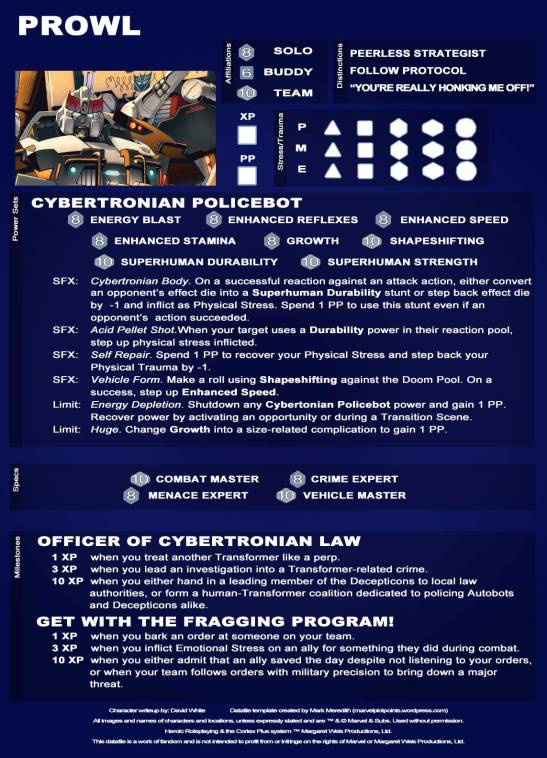 Jazz is Optimus Prime’s sub-commander. Where Prowl serves as Prime’s military and combat advisor, Jazz offers creative perspectives and acts as head of the Autobots’ secretive Special Operations division (of which he is the only known member). Jazz responds well to change and improvisation; in fact, he thrives in it. Ever since his arrival on Earth, Jazz has had a deep love for Earth pop culture. He can readily quote any movie or sing any Top 40 hit. Jazz’s personality makes him well-liked among the other Autobots, the perfect type of bot to have in second-command. 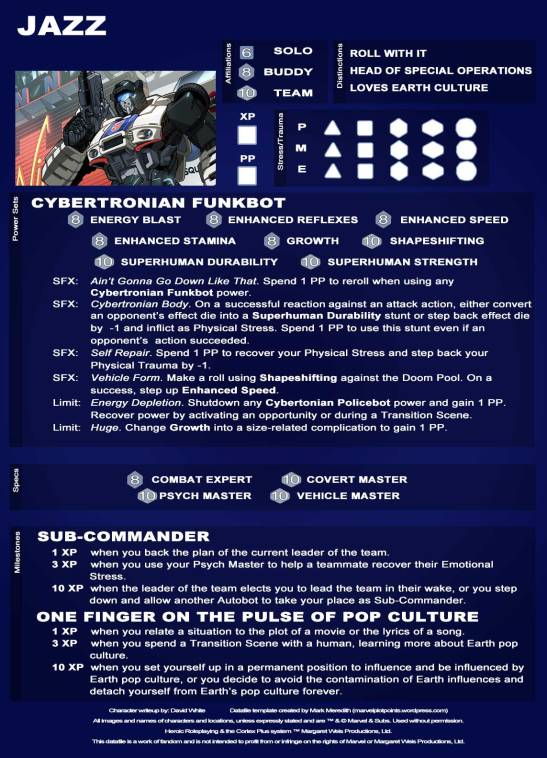 Prowl and Jazz are the buddy copbot comedy that practically writes itself. Prowl is the by-the-book stickler and Jazz is the off-the-wall loose cannon. Together, they will help Optimus Prime secure freedom and justice throughout the galaxy for all beings. I hope these two characters bring plenty of great roleplaying and memories to your tables.

This entry was posted on February 18, 2015 by David W in Datafiles, Transformers.