Today’s totem started life a little different than the rest of the ones we’ve seen. Peter started life as a spider minding his own business. When May Porker, the pig scientist, tested her atomic hair dryer she went mad and bit the spider. He was endowed with the powers of both a spider and a pig and Spider-Ham was born! And he does exactly what a Spider-Pig does!

Spider-Ham has fought alongside other heroes, like Captain Americat and the Simian Torch while facing enemies such as Ducktor Doom and Dr OctopussyCat. He has taken the humanoid nature of this other Spider-Allies in stride and has earned his place among them. 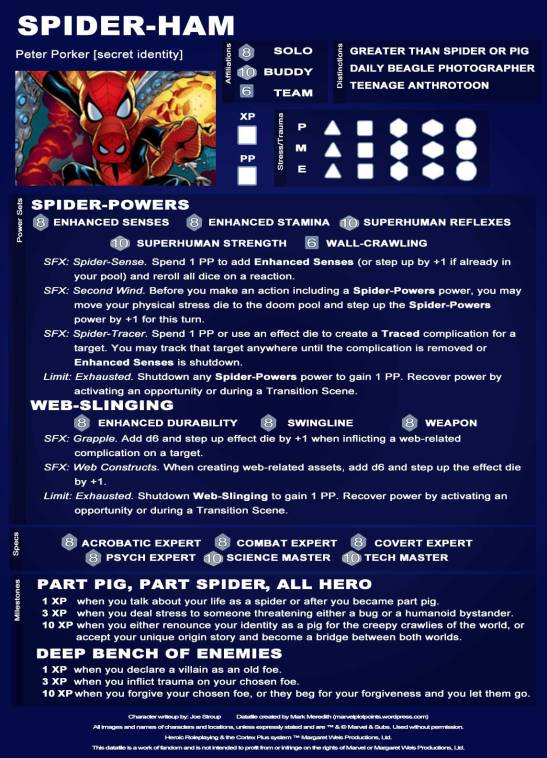 This datafile is mechanically very similar to the main Spider-Man from Earth-616, but he differs in his distinctions, specialties and milestones. This whole event is interesting because it shows how the way that characters can be extremely similar in power, yet play very differently at the table based on subtle differences in their motivation. One of the ways the milestone mechanic is really cool in Marvel Heroic Roleplaying.

In the Spider-Verse event, Spider-Ham has yet to make his mark (other than grossing out the Inheritors a bit and quipping some excellent wise-cracks), but what role will he play at your table? Advetnure on!

This entry was posted on January 23, 2015 by stroupjr in Datafiles, Spider-Verse.