The she-demon that calls itself Darkchild has confused memories of her former life and death as Illyana Rasputin.  She has flashes of her self-sacrifice at Inferno, of her resurrection as a child and death from the Legacy Virus.  But the past isn’t as important as the now, and of late, the now has been suffering, torture, imprisonment, and partial conquest of her little corner of hell.  Resurrected by fools at the Raft seeing the power of another demon, Darkchild seeks only to rule the chaos before her.  But will the demon remain dominant, or will Illyana cast off the darkness and return to the light once more?

Milestones For This Event:  Resurrected and Void Childhood 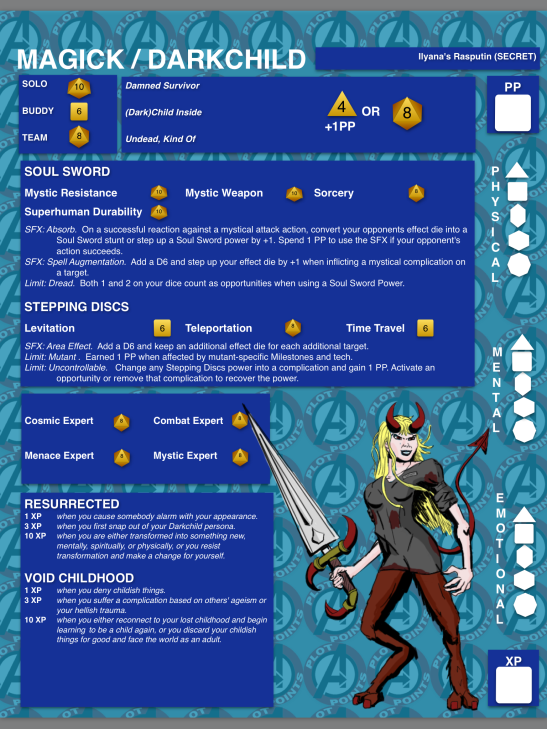 Arach-Knight – “Guilt and anger resonate from this one almost unchecked.  He wears his spider-symbol as though in penance.  He must be a lost soul not content with languishing in his own sin but rather seeking atonement.  I wish him well on this journey, as it is one I also travel.  Perhaps we should aid each other in this our shared quest.”

Crusader – “I have seen the vastness of the underworld, fought self-proclaimed deities and ruled over hells, and yet have seen no evidence of this fool’s god.  In my experience a deity is just a person with vast power; in the right context a mere mutant can be proclaimed a god, as was Storm not long ago.  Yet his power is surely not natural; I sense something sinister behind his power that he, in his delusion, believes is the power of the divine.  If he becomes a danger to others I will slay him, if he does not slay me first.”

Cyclops – “Ah, the ‘father-figure’ of the X-Men.  Scott has always done his best by me, and my brother, so I have great respect and love for him.  He’s family.  But something is wrong; he’s lost that easy confidence and commanding presence that I once knew.  Clearly he has suffered a great deal.  Maybe I can represent for him something once lost now regained, and help him find what he has lost within himself.”

Hellcat – “I feel a kinship with her for the similar fates we have suffered, but she is far better adjusted to that suffering than I.  How is that possible?  She walked in the pits of hell and emerged not tainted as I am but pure.  There is much that I can learn from her.”

Morbius – “Ah, a fellow monster, but in this case one of his own making.  I can see the hunger in his eyes that he cannot sate.  I’ve felt that kind of hunger, and we have both done horrible things seeking to end it.  I pity him.  I will do what I can to help him resist the temptation of blood while he searches for a cure.  If he cannot cure himself, and if he asks, I will end his suffering in the only way that a monster like me can.”

Nightcrawler – “Another old friend, and a welcome one.  No matter how dark things get, he has always managed to find the slightest glimmer of light to cling to.  I need him now more than ever to find the light within me…if it still exists.”

Nova – “The poor young fool thinks the life of a hero is all glory and fun.  He is even younger in spirit than in body.  That kind of innocence is to be at once cherished and hated, and cannot last.  I only hope that when reality forces him to grow up he does not suffer as I suffered.”

This entry was posted on October 27, 2015 by jpjolin in Actual Play, Datafiles and tagged Darkchild, Fearsome Avengers.