Item Power Sets: Fear Itself – Weapons of the Odin-force

In the face of darkest oblivion, what hope does humanity have? When overwhelming fear fells gods and our greatest heroes cannot even stand against the rising tide of darkness, extreme measures must be taken. But will even the power of the All-Father’s raw might be enough, or will the world burn even in victory?

Use these item power sets either in the Fear Itself event or perhaps become some great threat has arisen in your own game that only the night of Asgard can stand against. The first is the All-Father’s own armor and the sword of Ragnarok, which is reserved for the last great battle, but can only fulfill its purpose if we survive until the last great battle. Intended for Thor, could another great hero prove their worthiness to the All-Father and warrant this great boon? 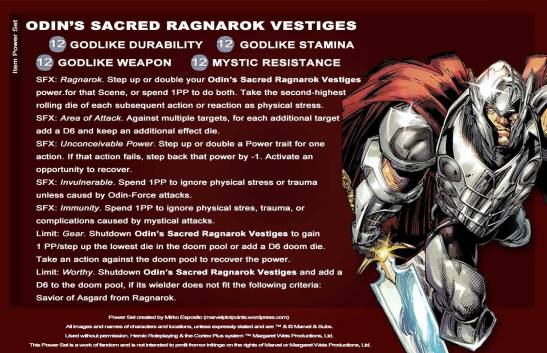 In the comic arc, Tony Stark worked alongside dwarven smiths and Odin himself to forge weaponry and armor to be used in the battle against the Serpent. Is this the first time that lords of Asgard have so equipped mortal champions? Could your own adventures put you in a position to require Odin’s mighty aid? 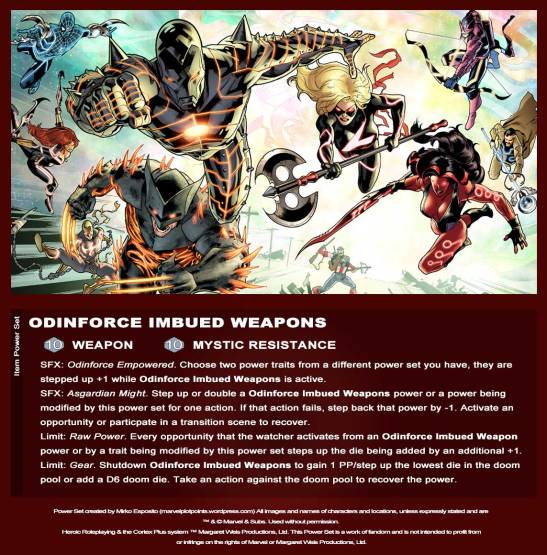 In the Fear Itself, Odin’s power gave the heroes a fighting chance and a hope to save the world from the Serpent’s grasp. What cataclysm could you stave off with the strength of the gods? What adventure could Odin’s armor lead your heroes too? What great cost will Odin require for this mighty boon? Your table will just have to find out, but let us know just how it plays out.

This entry was posted on March 30, 2015 by stroupjr in Asgard, Fear Itself, Item Power Set.