Guess what?! It’s time for Spider-Verse Week Part Deux! Back due to popular demand, here are more Spider-Men from all across the Multiverse!

To start off this second week of Spider-Verse, let’s start with the reason for the treason, the terrible leader of the vampiric Inheritors himself, Solus!

Not much is known about Solus or his intentions at this time in the Spider-Verse story, but we do know that Solus means a Multiverse of terror for all the Spider-Men. While he may be tracking down Spider-Men right now, should Solus succeed in draining all the Spider-Men of their strength, he could become a major threat to the rest of the Multiverse! Maybe even those not affiliated with a spider!

I hope Solus brings terror and unrelenting pain to your table. 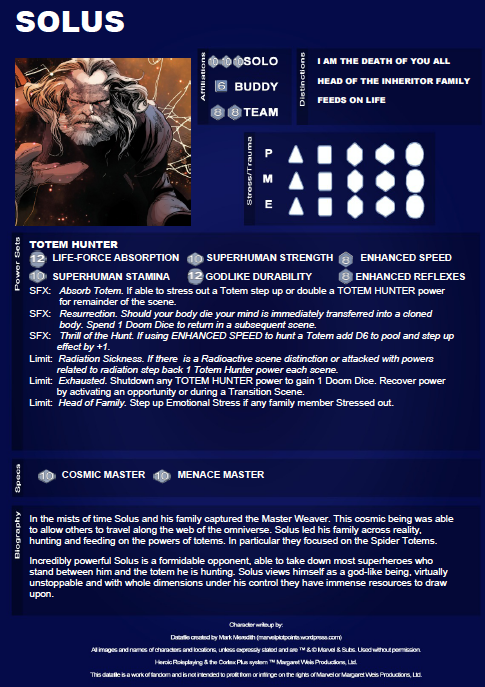 Also, this post may just be about Solus, but maybe his vampiric kin may appear… later…

2 comments on “Watcher Datafile: Solus, leader of the Inheritors”

This entry was posted on January 19, 2015 by David W in Datafiles, Inheritors, Spider-Verse.