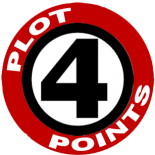 You Need to Read This: Hawkeye

You Need to Read This is a new column where the writers of Marvel Plot Points wax poetic about their favorite Marvel series and storylines. 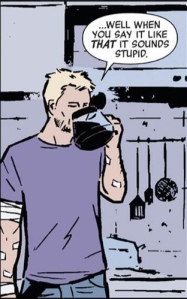 While Avengers shows the character at his height, kicking ass, flying through the universe (in Infinity) or going on top-secret missions (Secret Avengers), Hawkeye deals with what Clint Barton does when he’s not an Avenger.

This primarily involves him getting himself into whole heaps of trouble.

As the story unfolds, you get to know Clint Barton and all of the people who live in his apartment. Mention Grills or Pizza Dog to anyone who reads the series and they’ll instantly light up. It’s the smaller characters that really make the series pop. 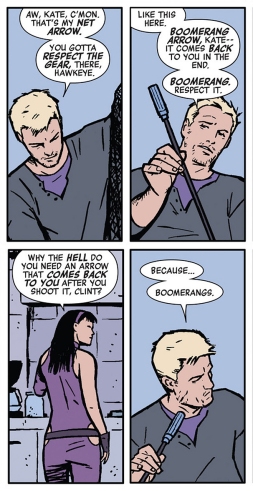 The writing is clever, razor-sharp and shows a man slowly getting beaten down by the world. Through it all, he keeps his sense of humor and keeps going. It’s great to see a superhero dealing with such small, personal matters, as well as dealing with a whole slew of street-level thugs (I don’t want to spoil anything for you). Also, Kate Bishop, from my favorite team, the Young Avengers, acts as Clint’s protege, learning the ropes and trying to save Clint from his own self-destruction.

David Aja’s art is really incredible, simply because it’s so simple. Everything is short, basic lines, with absolutely no shading to it. The characters are so well done they seem like real people, even though the style isn’t photo-realistic. It’s highly stylized, reminding me of some of the art within the Fiasco RPG at times. There are awesome shots, and it seems like Aja tries to do something new and different with each issue to change things up.

I can’t recommend the series highly enough, and I know two other writers here, Andrew and Ryan both adore the series too. You need to read this series, and you need to do it now. 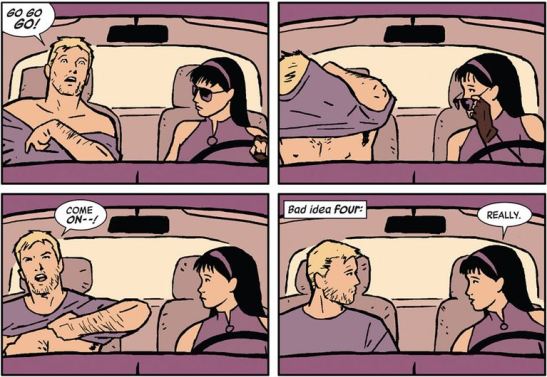 One comment on “You Need to Read This: Hawkeye”