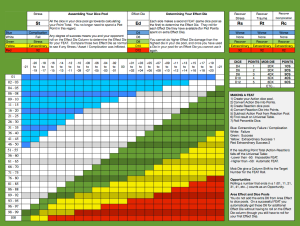 From the ashes of Marvel Super Heroes, like a Phoenix the Universal Table rises once more.

NOTE:  Maximum Carnage will return soon.  We’ve got quite a few Scenes in the works, and as this is an all-volunteer game-writing army, we can only get in so many hours a week.  Never fear, though, you’ll see more Maximum Carnage mayhem in the coming weeks.

For many gamers, the return of Marvel characters to role playing games in the Marvel Heroic RPG brought with it a fond recollection to our early gaming days when we broke out our boxed sets and rolled percentile die on the Marvel Super Heroes Universal Table.  The FEAT system (yeah, I know, everyone calls it FASERIP but that just seems less than heroic) was simple and easy to use, and got people playing.  Marvel Heroic continues that tradition, but for some of us, the nostalgia runs deep.

For that reason, I dusted off the old system and challenged it to return to the gaming world.  It took some tweaking of the Marvel Heroic rules, but I think it will serve very well.  For newer gamers, it has the Asset of requiring only 2d10 to play, saving gamers money in buying hordes of extra dice (and also saving table space).  For older gamers like myself, it also has the retro element going for it.

In order to get Marvel Heroic to work well in a Universal Table format, I had to change a few of the rules.  They aren’t major changes, though.

The heroes and Watcher assemble their dice pools as normal.  However, instead of rolling your dice and then choosing your Total and Effect DIe, you convert all of your dice in your pool into points and total them.  The Watcher does the same.  Then you subtract the reaction pool from the action pool to get your Target Number.

Take the Target Number and find it on the top row on the Universal Table.  Now make your FEAT: roll Percentile Dice (2d10).  Find the result in the leftmost column.  The intersection of the FEAT Result and the Target Number will give you a FEAT Color.  Green is a successful FEAT, Yellow and Red are each Extraordinary Successes (Red counts as two Extraordinary Successes).  White is failure, and Blue is Extraordinary Failure (which may result in a Complication or in you having to step down your Effect Die).

Note that the maximum Effect Die you can get is equal to the maximum die in your Dice Pool.  If you only had D8’s and D10’s in your dice pool and you get a Red FEAT Result you still only get a D10 Effect Die.  All rules for stepping up your Effect Die in the standard Marvel Heroic rules apply to determining your final Effect Die after making this FEAT.

Make this Effect Die FEAT however many times you must for the number of Effect Die you have spent Plot Points to create.  However, you do not need to roll again for Area Effect (see the Universal Table for rules for Area Effect and Dice Pools).

Any time you have a character sheet with multiple dice under a single entry, such as Team 3D6 or Superhuman Strength 4D10, you only count 1DX in your dice pool.  The remaining dice count as Column Shifts on the Universal Table.  A Column Shift is a single step to the left or the right from your original Target Number.  If the multi-dice is on an opponent’s dice pool, it is a negative CS, if it is on yours or an ally’s, it is a positive CS.

I will be the first to admit this variation of the Universal Table may not fit every game.  In fact, I’ve never play-tested it.  That’s where you all come in.

Run some games with the Universal Table and get back to me.  Where did it excel?  Where did it come up short?  What fixes did you implement that made all the difference?  Can you find ways to restore the top bar to multiple combat results that make sense in Marvel Heroic?  If I get enough feedback I can create a revised Universal Table with your changes, and everybody wins!

This entry was posted on March 7, 2013 by jpjolin in Actual Play and tagged Universal Table.