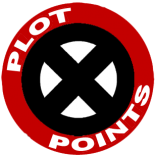 What, you didn’t think you would go a whole week without hearing from me did you?

Let me just say up front that this article is really by all of us in the Plot Points Bullpen. We were discussing these ideas over email last week and decided it would be useful to write about them on the blog. I just volunteered to knock it all together into a post. So if there’s something you don’t like, I’m sure one of the other guys came up with it.So let’s talk about including Item Power Sets in your Marvel Heroic Roleplaying games.

There are a couple different ways to incorporate Item Power Sets. Which way you go will depend somewhat on what type of players you have. Basically it boils down to a mechanics-based or story-based implementation. That said, it’s not necessarily an either/or proposition. There are a spectrum of choices anywhere between these two poles.

Let’s say you have a “power-gamer” who comes to you and says, “Here’s my character concept: Alien Symbiote-Juggernaut hybrid Thor.” To which you as the Watcher would likely reply, “No that’s ridiculous.” Which would then prompt said power-gamer to whine, “There’s nothing in the rules that says I can’t do that.” So, what do you do? Let them have their “Mary Sue” or invoke Watcher veto power? Another option would be setting the Item Powers Sets as unlockables during the course of an Event. Cam Banks suggested as much in a thread over on MWP’s forum, which can be found here.

The short version is, you spend 5XP to unlock a new blank Power Set slot. After that, pay out 15XP to swap the blank Power Set for the Item set. That means that in order to get the new Power Set, a hero has to pay out 20XP. 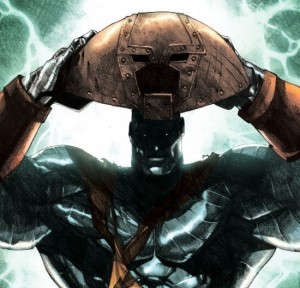 Using Colossus as an example, in Fear Itself, he sacrificed himself to become the new Avatar of Cyttorak. Assuming he had already racked up 10XP over the course of the event, plus getting 10 more from his Milestones for sacrificing himself, he’d have plenty to cash in for the Crimson Gem of Cyttorak Power Set.

That example assumes a story-based connection between the character and the Item Power Set, and really that makes the most sense for the MHRPG. But there’s nothing stopping you from letting your players have any items they want as long as they have the XP for it. It just comes down to the kind of game you want to run. Just keep in mind, if the players have access to too much power they will (probably) eventually get tired of being super-ultra-mega-powerful because there is no challenge, and RPGs (for the most part) are about overcoming challenges.

The other end of the spectrum for incorporating Item Powers is a purely story-based approach. What that means is the character gets an item, without the player having to expend any XP, because it makes sense in the story. Characters that get items this way likely won’t keep them permanently. They may keep them until the end of an Event, or an arc. Until it no longer makes sense from a story perspective for them to have that item. An example would be in an early Secret Avengers story-arc when Steve Rogers gets the Nova power. He did not take it with the intent to keep it forever, but in the context of the story he needed it. You can handle Item Powers in your game the same way. That might mean you wind up with one character that seems more powerful than the others, but that is likely between characters even when there isn’t an Item Power Set involved. As long as you have players that want to serve the story, rather than “win the RPG”,  you shouldn’t have a problem.

Another option is one that we are employing in our Secret War Event, and that is giving all the characters the same item. In the case of the Secret War that is the Kree Tech Armor. Used in this way, items can function as quest-related boosts. Again, these are usually temporary and originate from the Watcher.

So, what do you think? How do you plan on incorporating items in your game? Do you plan to use them at all? Let us know in the comments, we would love to hear your thoughts.