Can you feel it?

It’s coming. The Phoenix, racing across the galaxy with one destination in mind: Earth. 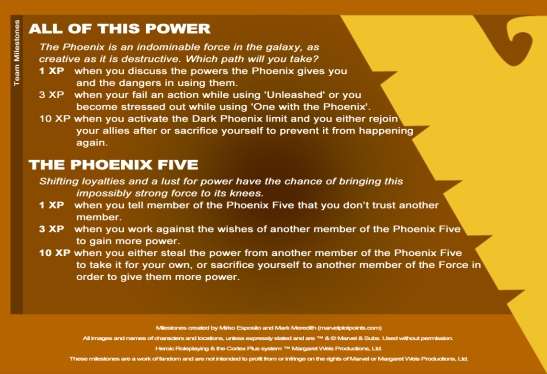 Finally, we have the Power Set for the Phoenix Force itself. This is provided in case, in your Events, different characters end up in the embrace of the Phoenix. Have fun!

As an example for how this Item Power Set could be used for any character, Seamus said I should look at putting the power-set on a character who didn’t acquire the Phoenix Force. Since I can’t resist that man, I complied. Enjoy, Seamus. In addition, I’ve created two looks to the datafile. I’m looking at trying something new. I’d love to get your feedback.

This entry was posted on September 11, 2016 by Mark in AvX, Events, Item Power Set, Milestones, Uncategorized.