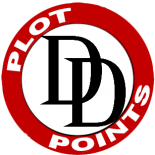 Dustin Curtis played Plot Point’s version of Deadpool in the Skype game I ran last month (which you can read more about here). He was inspired by Seamus’ War Journal recap of the session, and decided to do his own. From Deadpool’s…unique point of view.

So, this Punisher guy is apparently keeping some kinda journal!

This is stupid and likely a good way to get us arrested!

So me, myself, and I went to the DC Mall to gets some chimichangas from Juan. He’s rumored to be the best Chimichanga chef in all of the Cosmic Universe, or maybe just DC but whatever.
There was some big crowd at the Mall, must be parents fighting over the next Furby or whatever.

I heard it was some geeks having an edition war. Something about 4E, Next, or Pathfinder or something.

No way! It was Star Wars and Star Trek!

Buncha famous people were showing up and what not. Cap’n America and Tony Stark and that Doom guy, betcha it’s a doombot!

No way, totally the real deal!

Wonder if he needs a mercenary? Haven’t had a decent job in a few weeks.

Well, I got my chimichangas and was headin’ out and this Doom guy was causin’ a fuss of some kind or other as he stormed out. So I hung up a sign proclaimin’ a Bea Arthur Fan Club gathering hosted by President of the Fan Club, Victor Von Doom! Of course, it’s actually me, but creative licensing and all.

That joke was genius!

Well, suprise suprise as Doom attacks DC. Can’t invite a Supervillian anywhere nice without him wrecking the party. But hey, SHIELD Commander Hill or something or other is here, she’s not bad looking.  Wonder if she’d sleep with me? I don’t have a chance with Doom destroying the city though. Maybe I can get some work and get the girl?

So I offer the illustrious services of the famous Deadpool! Of course she accepts the offer to pay me, cuz I mean who wouldn’t hire the world’s greatest mercenary? After she agrees, I of course get to work by pulling out my trusty rocket launcher. I call her Bea, cuz I named her after my greatest love.

So I fire out a rocket at Doom and it does totally squat. How unfair, some guys being immune to exploding. It’s just not right! Then Spider-man and the Punisher show up and try to help. That Punisher guy totally figures out that Doom to impervious to bullets as well as explosions. Some Supervillians have all the luck.

Then Dr Strange restrains the Doom guy and Spiderman tries to harrass him with some webbing. But Dr Doom blows up a few things and escapes as I’m trying to strip naked to assault him with the hideous sight of my flesh. I mean if I can’t blow him up or cut him with my swords why not some mental scarring?

But my swords can cut through tanks!

Then Maria Hill yells at us for messing the whole thing up. She’s still not bad looking even when angry. Maybe I should ask her back to my apartm…wait…Strange, he’s totally mystical. He could resurrect the dead or send me back in time…right? I totally bug him about bringing back Bea Arthur or sending me back in time. He keeps stubbornly refusing me. I’ll get Weasel to look up his phone number. This totally isn’t over!

This entry was posted on October 2, 2012 by Andrew Gatlin in Actual Play.