Marvel NOW 2015 has introduced a lot of new heroes and certain heroes have come to the forefront or changed drastically. Here at Marvel Plot Points, we love excuses to make new Datafiles, so Marvel’s new initiative has us excited! We hope these new datafiles bring your table lots of fun!

In conjunction with our Marvel NOW 2015 week, I bring you the

I am a HUGE fan of Steve Rogers. The whole boyscout, never-say-die, 1940s-mentality is just great to me. So, when they announced that Rogers was going to start feeling his age and that Sam Wilson was going to take over for him, I’ll admit: I didn’t like it. I was among those people that made plenty of Captain Falcon jokes. (In fact, I find myself popping the rubber band on my wrist to keep myself from typing them now.) But, just as was the case with Miles Morales (another hero I did a datafile for here), I found that the change was refreshing.

Steve Rogers will always be Captain America, certainly, but I enjoy the issues and possibilities for growth that Sam Wilson brings to the role. America is no longer the monochromatic nation it once was (it hasn’t been for a long time), so choosing a black man to represent the nation I think is fitting. Really, he represents what Steve Rogers represented back in the 1940s. Steve was a weak, impoverished guy from the slums, but possesses a strong desire to do what is right. In a lot of ways,  Sam also represents what Steve was but in the here-and-now, he was a street kid from Harlem, an impoverished city, and he has the desire to do good for others and also to atone for his past life choices.

I support Sam Wilson in this role and I look forward to reading more of his adventures as the Star-Spangled Captain.

Below is the datafile for Sam. I hope he flies high and beats fascists low at your table. 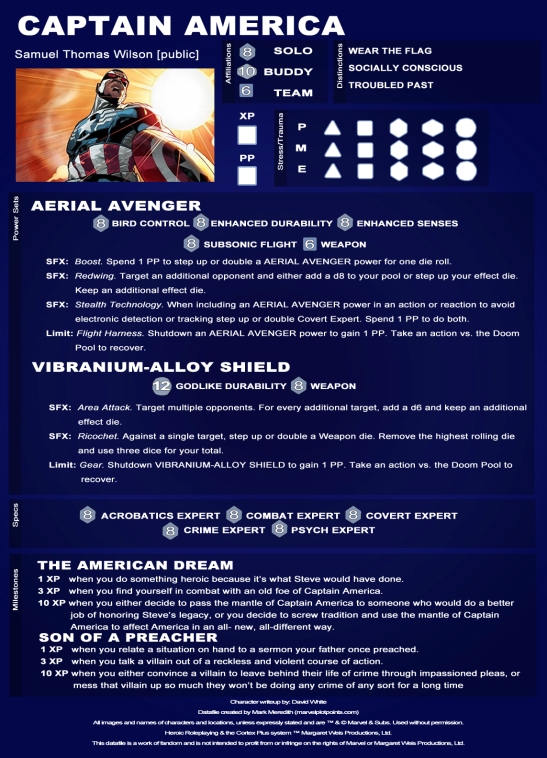