Actual Play: Into the Savage Land

Last night, a few guys and I got together to play the Marvel Heroic Roleplaying Game on Google+. I had initially planned on running The Moon is a Lonely Place to Die, but I left the files on my computer. At work.

Many of the players had previously played Breakout, so after toying with the idea of winging my own Event, Adam suggested I run the second half of Breakout: Into the Savage Land. Great idea! The game was afoot.

We had seven players (not including me), so things ran a little slow, but I think the group dynamics were really, really good.

SPOILERS AHEAD FOR BREAKOUT ACT 2

After dealing with the supervillains in the Raft on Riker’s Island, the heroes followed a tip that Electro had escaped with Karl Lykos, also known as Sauron, and had fled to the Savage Land, a tropical paradise in the Antarctic. Mr. Fantastic (Adam) offered his Fantastijet for the heroes to use, piloted by Johnny Storm, the Human Torch (Charles). Along for the ride were Spider-Man (Andrew), Wolverine (Brian), Gambit (Dean), Daredevil (Matt), and Captain America (Seamus).

Mr. Fantastic assured the group that they would be able to land safely, as this Fantastijet had been modified specifically to absorb the vibrations of Vibranium in the land which usually caused aircraft to crash. Captain America expressed concern, as he had never been to the Savage Land without his jet crashing, but Mr. Fantastic assured him it was alright. It was at this point that Human Torch decided to leap out of the jet and fly alongside to catch some of the cool Antarctic breeze. Mr. Fantastic took the controls as Adam rolled against the Doom Pool (currently only at 2D6) to successfully land the jet.

With a success, Mr. Fantastic found a spot to land and settled it down. The heroes began to disembark. Mr. Fantastic stayed within the jet and finished up a small experiment to create a Progressive Mutation Serum (an asset at D6) to deal with any mutates they may encounter. Captain America began limbering up and performing some exercises to get himself ready to fight, creating an asset of Combat Training at D8. 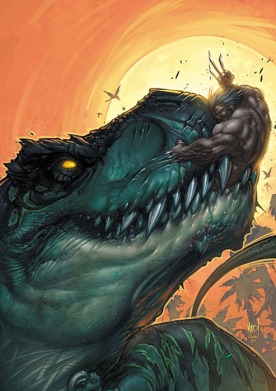 As Mr. Fantastic exited the jet, Human Torch noticed a rustling in the trees from his vantage point in the air. Suddenly, everyone turned to see a massive T-Rex stomp out of the jungle. It immediately stepped on the Fantastijet, crushing it beneath its weight. They were trapped in the Savage Land.

The heroes immediately sprung into action.

I don’t remember the blow-by-blow, so I’ll talk about a few highlights:

Firstly, I love that Ican spend dice from the Doom Pool to change a defensive action into an offensive one. Frequently, the heroes would attack the T-Rex, and when they failed, I would spend from the Doom Pool to turn my Effect Die into an attack at them causing physical or emotional stress. This represented anything from Daredevil attempting to wrap his swingline around the T-Rex’s mouth, and instead getting thrown back into the foliage to Wolverine getting angrier and angrier as his attacks did nothing to the beast.

As soon as the battle started, Torch decided to leave the group and go searching for Sheena, Queen of the Jungle, who he had heard about. I wasn’t sure why Charles decided to just ignore the whole battle, until he pointed us toward his Milestones. One of them gives him a lot of XP for leaving the group at a crucial moment. Like when a T-Rex is attacking. In one fell swoop, he earned himself 14 XP. Well done, Charles.

At one point, Mr. Fantastic attempted his own Fastball Special with Wolverine, instead wrapping himself around some trees and becoming a trebuchet, flinging Wolverine through the air at the monster.

Daredevil decided to hit the dinosaur in the eye with his billy club, throwing it throug the air. It succeeded, but at the cost of me spending a Doom die to have the club lodge in its eye, robbing Daredevil of his weapon of choice.

The players had a really, really hard time doing any damage at all to the T-Rex. There were a lot of 1’s rolled by the heroes, creating a fairly large Doom Pool to roll against when they needed to. It also provided me with lots of dice to spend to add in some nasty effects.

By the time the heroes finally took down the monster, they were exhausted, I was exhausted, and we called it quits for the night. The heroes spent a short transition scene trying to lower their stresses, before heading off into the jungle to find Sauron.

We got to see Andrew’s Gambit in action. He’s a very volatile character, but fits in perfectly with the official datafiles.

It was a fantastic game, and I look forward to playing again next week and see where these heroes end up.

13 comments on “Actual Play: Into the Savage Land”